A Stab in the Dark

Carmen Martinez (All Chapters)
Marina Romanova (The Next Level 2)

The Bureau arrived in Singapore to meet lawyer Michelle Zuria for information about SOMBRA’s "next level". Before Carmen and the player could speak with her, Michelle received a call from her client, Anbu Devanesan, saying that he had found his girlfriend, Constance Tan, stabbed in the stomach in the Giant Wheel observation cabin.

During the investigation, Anbu tried to jump off a building due to grief. Furthermore, the team found the killer's device which (per Elliot) was encrypted by SOMBRA, proving that Constance was killed by a SOMBRA agent. The killer eventually turned out to be Anbu himself.

After Anbu denied involvement, Elliot came in with the finally-decrypted device. He said Anbu was laundering SOMBRA's money in Singapore. Anbu revealed afterward that he stabbed Constance with a parang because she discovered his job in SOMBRA. He then abducted Elliot and escaped.

Jack said he had tailed Anbu and Elliot to the bay gardens before the former shot him in the arm. Investigating there, Carmen and the player found Anbu's bloody tie, with Lars saying that the tie was used to gag Elliot. The two then asked Jonah for help, who then advised them to return to the gardens. There, the two found Elliot's broken phone with an unsent message directing them to the docks.

Meanwhile, Marina and the player interrogated Michelle. During the interrogation, the team deduced that Anbu was funding the "next level" program. Michelle pointed the team to the Giant Wheel. There, they found out Anbu had hidden a document proving SOMBRA had "successfully" experimented with Thanid Tongproh. After talking to Sanjay Korrapati, he told them that there were rumors regarding the recruits being experimented on.

Jonah, Carmen, and the player rushed to the docks before Anbu could escape by ship. They found Anbu, who threatened to kill Elliot. Jonah acted quickly by shooting Anbu in the hand, saving Elliot. Judge Adaku sentenced Anbu to life in jail for the murder of Constance Tan, money laundering for SOMBRA, the abduction of a police officer, and failure to cooperate with the authorities.

Post-trial, Elliot said he overheard Anbu ordering a boat to Indonesia. The Bureau headed there to dig deeper into SOMBRA's plans.

Brian Chua
Add a photo to this gallery

Jonah Karam
Add a photo to this gallery 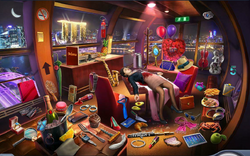 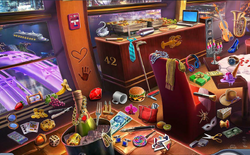 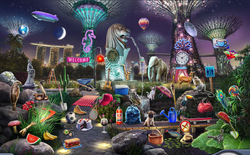 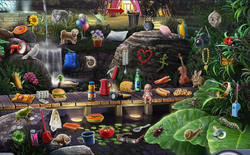 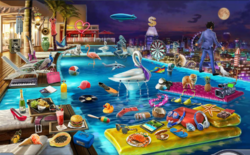 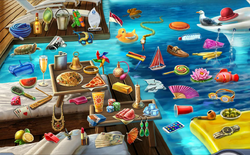 Poolside Tables
Add a photo to this gallery

Retrieved from "https://criminalcasegame.fandom.com/wiki/A_Stab_in_the_Dark?oldid=511986"
Community content is available under CC-BY-SA unless otherwise noted.