A Slice of Death

Jack Archer (All Chapters)
Amy Young (The Art of War 4)
Zara Tien (1 task in The Art of War 4)
A Slice of Death is a case featured in Criminal Case as the twenty-ninth case of Travel in Time (Season 6) and the three-hundred twentieth case overall. It takes place in Medieval Asia.

Jack and the player went to Shogun Yoshinobu Gojo’s palace to ask him to assist the Chinese in their war against the Mongols, only to find him sliced in half in his bedroom.

Mid-investigation, Janis was able to determine that the shogun had gone to a nearby teahouse per her examination of his stomach. Later, the team heard an explosion coming from near the teahouse, only to find out it had come from the miners blowing up some rocks. The team then found out that Ogedei Khan had assigned Oume, the teahouse's owner, to discreetly assassinate the shogun; however, the evidence ultimately pointed to the shogun's right-hand man, samurai Jyunpei Oyama, as the killer.

Jyunpei admitted that he wanted to retire from his service as the samurai and become a pacifist monk. Every time he asked permission from Shogun Yoshinobu to let him go however, the Shogun refused to let him retire given his efficiency. In order to peacefully retire and save innocents from himself, Jyunpei sliced the shogun in half. The team surrendered him to the shogun's wife, Tokiko Gojo, to which Jyunpei accepted that he would have to commit seppuku as punishment.

Post-arrest, Zara told Amy and the player that Theo had run away from her while they were cuddling. The team then found Theo in the temple, where he told them that he was starting to disappear. Speculating that something had happened to Princess Torgoljin, Theo's ancestor, Amy reassured him that they would find out what was happening to him when Penelope and Kai reported from Mongolia.

Meanwhile, Tokiko Gojo told Jack and the player that she would be taking the position of shogun with her husband's death. Shogun Tokiko told the team she was happy to lend her soldiers to China but they needed swords, the steel for which was not due to come down from the mine for another week. The team then found iron near the mine, which Janis and swordmaker Yoshimune were able to fashion steel swords out of.

After all the events, Kai told the team that Torgoljin was safe, having last seen her talking happily to Santiago Sanchez. The team then went to reunite with Kai and Penelope at the Great Wall of China to hopefully stop the war between the Mongols and the Chinese.

Yoshimune
Add a photo to this gallery 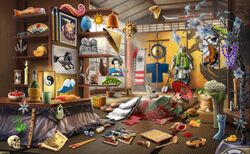 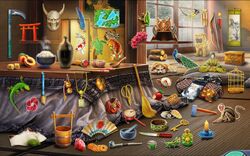 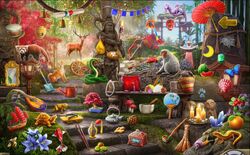 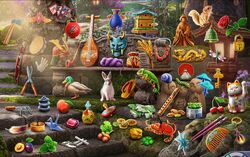 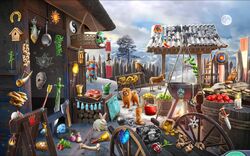 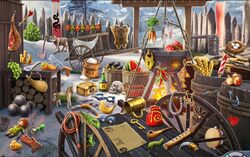 Snowy Patio
Add a photo to this gallery

Retrieved from "https://criminalcasegame.fandom.com/wiki/A_Slice_of_Death?oldid=522494"
Community content is available under CC-BY-SA unless otherwise noted.