What's on your mind?

I'm looking for facebook to friend to add to recruit for criminal case mainly the newest "city of romance" my facebook link is https://www.facebook.com/Mardo305 pm me what criminal case game you play so I can download and add you. Otherwise friend request will be ignored as I'll assume your spam

Is there any way I can play Travel in Time within the main app in android?

I’ve been playinc CC a lot these days and even though I’m only on season 1 case 28 I know almost all the lore of the game. And playing it so much also makes me have dreams abt it. You know how we have one male and a female (Amy and Frank in PB, Jack and Carmen in STW, Madeline and Isaac in MOTP, Jones and Gloria in the Conspiracy, Amy and Jack [i might be wrong lmao] in TiT, Gwen and Luke in SI and Carrie and Hugo in Paris) “helper” with us in every season but Grimsborough? So my brain decided to fill that part out apparently. Anddd guess who the female partner was: it was Rachel Priest our favourite news reporter! My brain prb did that because she has the same/similar hair colour with Jones lol. In the dream I first found the body in a tundra-ish place, but right after I was done with the crime scene, Rachel said “This cold is really getting in my bones. She started leaning forward, about 30 degrees every time I pressed next, the text part filled with dots. About 4 clicks later I received a CC notification saying “New Lab Sample! Dead Body” Guess what, it was her body :D My brain also probably related this to Rose Zhao’s arm since I watched that case. I know I talk too much but some of yall would maybe find it interesting :)

Season 7 had the least number of judgments and killers being sentenced out of all the seasons. Very few of them were actually punished but we don't know about the others, not including the demons such as Reggie Pratt and Edwina Pickles, or those who died such as Theresa Rosenthal, Tiffany, Adam Enstrom, Zeke Davis, or Eric Zwarte. Considering the penalties for murder varying by state, the murder degree, whether the killer showed remorse, and the circumstances of the crime, what do you think happened to the other killers such as Serena Kwame, Andrew Lodge, Heather Night, Joseph Hardcastle, Axel Bross, etc?

A while back, I encountered a glitch where the crime scene score screen showed that I need 0 points to get the next star: 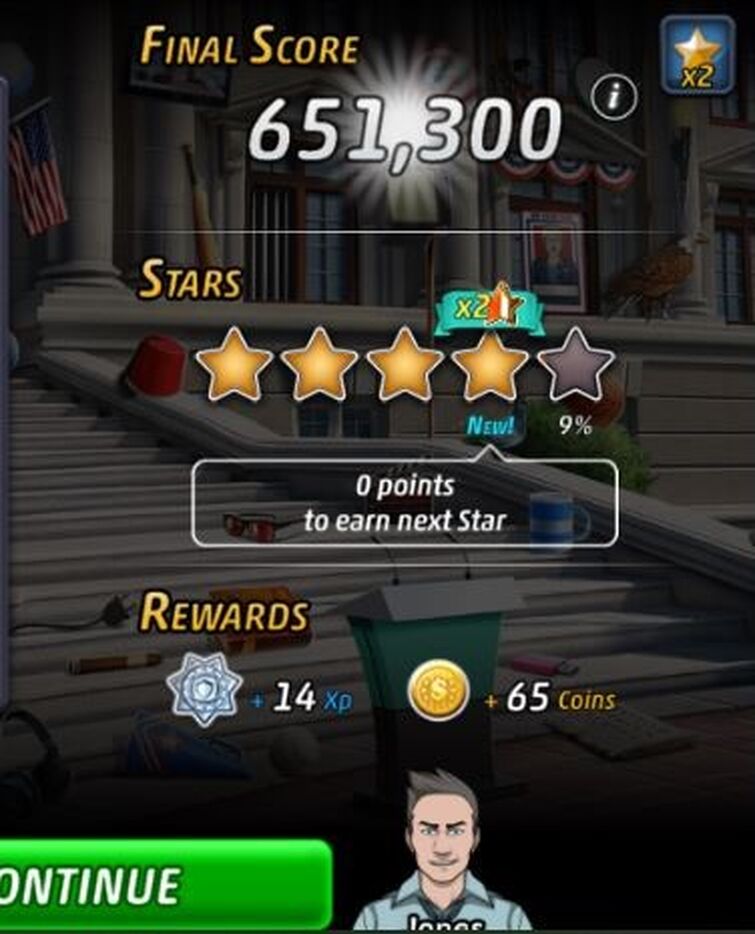 I have no clue what caused this to happen.

(edited by BrutalBear98)
All the King's Horses

-In case 11 of MOTP, That Sinking Feeling; we see Maddie's cousin Rose O'Malley in the AI and there, she is seen holding her baby, who is Maggie.

-She looks like less than 2 years old, if not less than a year old.

Can you guess each character name? (I removed the vowels)

1 pt per good answer. At some point I will reveal the answers and count the points.

The consonnants are mixed up.

Can anyone tell me how to connect any of these games to Google Play in order to be able to collect the achievements?

I've tried connecting it to Facebook (same email as Google Play), but it still didn't work.

I've played criminal case before but I never finished an entire game, but now I'm playing it again. Whenever you finish all the cases on an entire game, will all your pets and rings be transferred to the next game? Don't call me dumb or anything if its an obvious question, I just want to know now so I don't freak out if it is the case. Thanks!

I can't sign on, even using s different browser. Says error - reload, which it doesn't.

I've always wanted to hear this from the fandom, but if you were to choose a character or more that you favor based entirely on looks and/or personality in each season of Criminal Case, who would it be?

(edited by Another Guy On The Internet)
Guidelines